Footings refer to the structural elements that support buildings or structures. They bear on the earth and usually constructed of concrete or brickwork. There are shallow foundations, deep foundations and pile type foundation, which can act as supporting footings of building.

Shallow foundations or footings, are usually embedded about a meter or so into soil. One common type is the spread footing which consists of strips or pads of concrete (or other materials) which extend below the frost line and transfer the weight from walls and columns to the soil or bedrock. a typical size for a single-storey house would be a cross-section of concrete about 300 deep by 450 width containing eight steel bars about 10 mm in diameter.

Another common type of shallow foundation is the slab-on-ground foundation where the weight of the building is transferred to the soil through a concrete slab placed at the surface. Slab-on-grade foundations can be reinforced mat slabs, which range from 25 cm to several meters thick, depending on the size of the building, which are typically 10 cm for houses, and 150 mm for industrial premises.The slabs would have edge beam extending another couple of hundred millimetres into the ground. . For a house the edge beam would extend all around the perimeter and under any load-bearing internal walls.

A deep foundation or footing is used to transfer a load from a structure through an upper weak layer of soil to a stronger deeper layer of soil. There are different types of deep footings including impact driven piles, drilled shafts, caissons, helical piles, and earth stabilized columns. The naming conventions for different types of footings vary between different engineers. Historically, piles were wood, later steel, reinforced concrete, and pre-tensioned concrete. A monopile foundation is a type of deep foundation which uses a single, generally large-diameter, structural element embedded into the earth to support all the loads (weight, wind, etc.) of a large above-surface structure.

A large number of monopile footings have been utilized in recent years for economically constructing fixed-bottom offshore wind farms in shallow-water subsea locations. For example, a single wind farm off the coast of England went online in 2008 with over 100 turbines, each mounted on a 4.7-meter-diameter monopile footing in ocean depths up to 18 meters of water.

Raft Foundation is a structure composed of multiple piers with a concrete capping beam or slab. these are used where there is no solid bearing for the piles and these act in a friction manner.

Footings are designed to have an adequate load capacity with limited settlement by a geotechnical engineer, and the footing itself is designed structurally by a structural engineer.

Other design considerations include scour and frost heave. Scour is when flowing water removes supporting soil from around a footing (like a pier supporting a bridge over a river). Frost heave occurs when water in the ground freezes to form ice lenses.

Changes in soil moisture can cause expansive clay to swell and shrink. This swelling can vary across the footing due to seasonal changes or the effects of vegetation removing moisture. The variation in swell can cause the soil to distort, cracking the structure over it. This is a particular problem for house footings in semi-arid climates such as South Australia, Southwestern US, Turkey, Israel, Iran and South Africa where wet winters are followed by hot dry summers. Raft slabs with inherent stiffness have been developed in Australia with capabilities to resist this movement

Screw in metal piles are becoming popular these days as they have a number of advantages. They can easily find a consistent bearing foundation no matter how the soil layers differ in location. They leave no spoil and can be more economical then concrete piers.

The advantages of screw pile footings 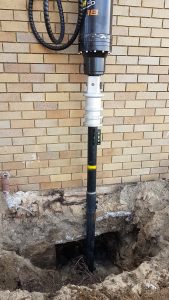 Using blade piles to underpin existing footings of a sinking house where water table is one meter below the surface. Piles are to rock at 6m